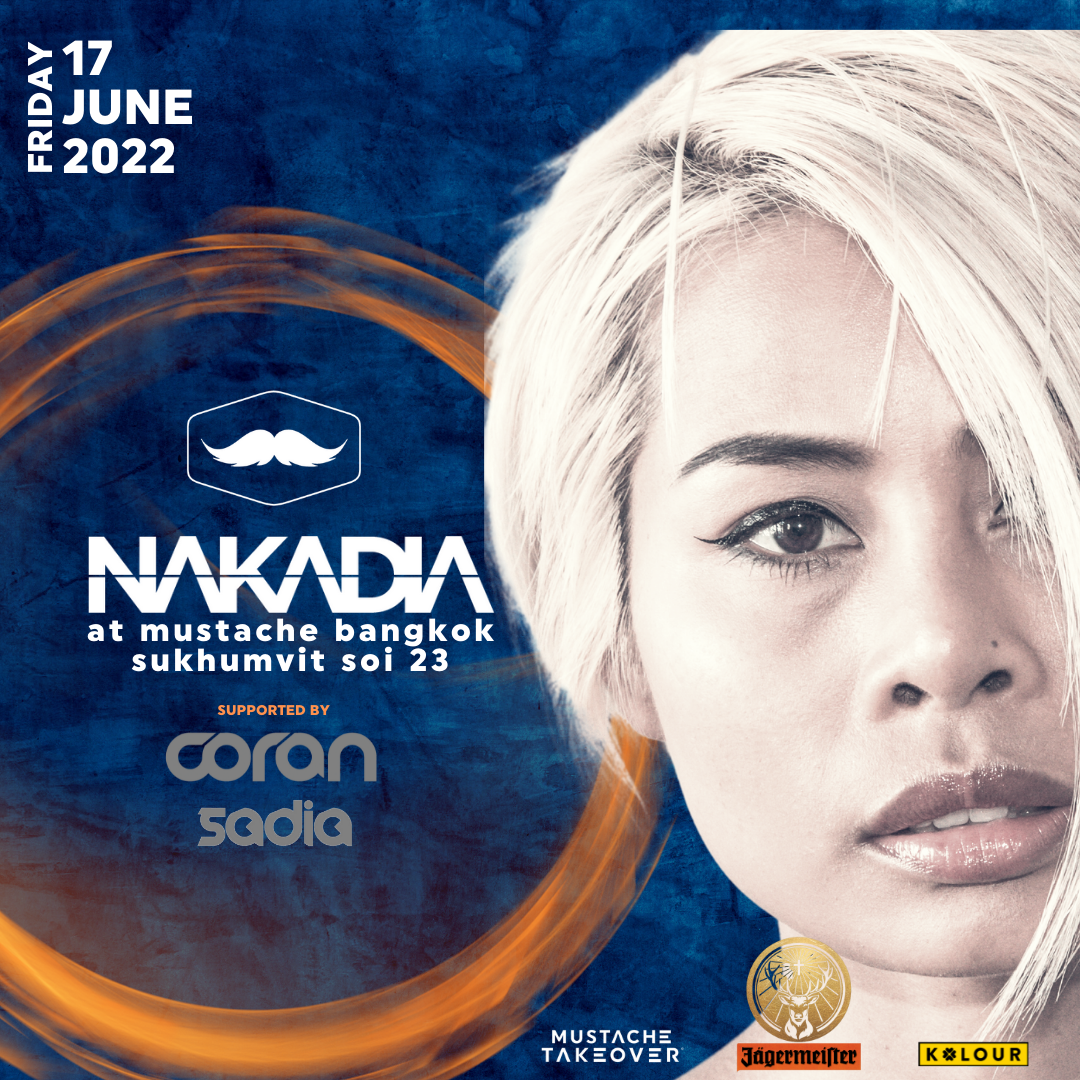 There is no better way to get into an amazing start at our new venue sukhumvit soi 23 than dancing with the Asian Queen of Techno
After touring all corners of the globe and Kolour Phuket, Nakadia returns to her Bangkok home base at Mustache. You know it's going to be a crazy night you don't want to miss.

NAKADIA BIOGRAPHY
Nakadia has carried her unstoppable energy since childhood while growing
up in the poor Thai countryside without electricity or running water, living in
a self-build house on less than 1 USD per day. But Nakadia still has sparkling
eyes when she looks back at her happy childhood as she didn’t miss
anything. This pure happiness about live itself she kept until today – half a
lifetime later, touring the globe as a world-famous artist.
The journey between Nakadia’s early days and her global success was a
long and difficult one, which started in 2002, when she was invited by a friend
to a first visit of Europe. On her first night out she discovered Techno and
she immediately knew: “This is what I was searching for! I was born to be a
DJ!”
A turbulent journey began. She devoted herself to finding the perfect sonic
fuse. In 2003 she moved to Koh Samui and her gigs on this tourist island
launched Nakadia’s international career within a remarkably short time.
Crafting her sound without any guidance, in a country marked by the
mainstream, she pioneered the rise of the underground in her home country,
conquering the rest of the world at the same time. Her daily fight against
prejudices just made her stronger, proving herself over- and over again in
this male dominated industry where she often was belittled as “the little cute
Thai girl”. Instead of being frustrated, she always kept her positive energy
and no setback made her loose the famous Thai smile, always moving
forward, pushing herself from one milestone to the next without support by
anyone who could have opened the doors more easily.
In 2010 Nakadia moved to Berlin as her constantly filled tour schedule made
it impossible to keep working out of Thailand. By the end of 2019 she pinned
over 1600 performances across 72 countries to her gig list, playing at
“Tomorrowland”, “Love parade”, “Loveland”, “Sonne Mond und
Sterne”, “Parookaville”, Nature One, as well as “Watergate”, “Tresor”
or “Sysiphos” in Berlin, “D Edge” Sao Paulo, “The Egg” London,
“Marktkantine” Amsterdam, “Rainbow Serpent Festival” in Australia, as
well as countless other top venues-, festivals- and events.
After being discovered by Yann Pissenem during a performance at
“Sankeys” in the summer of 2013, she became a fixed name on Ibiza,
performing regularly at hotspots like “Ushuaia”, “Amnesia”, “Sankeys”,
“Zoo Project” or “Blue Marlin”. As a promoter she made history in Thailand
with her legendary “Nakadia welcomes” nights, hosting legendary Sven
Väth 7 times across her home country.
Nakadia has always felt the urge to spend more time producing her own
sounds, but her busy touring schedule never left much time for studio work.
Early releases between 2008 and 2016 gave a first glimpse of what she’s
capable of. Finally, in 2018, she presented us with some exceptional techno
tracks. A first EP was released on Filth on Acid in early 2019, and stayed in
Beatport’s top 10 techno releases for two weeks. The EP was a statement,
but just the start of a new chapter of Nakadia’s career. Another EP, signed
by Carl Cox for his Intec imprint, was released in June 2019, followed by
regular releases on labels like Set About or Codex.
In 2020, at the beginning of the Corona crisis, Nakadia was a part of the first
major live streams which were seen by millions before streaming became a
daily normality. From her home in Berlin she performed a vinyl only set for
Mr Afterparty’s first streaming marathon and only two weeks later she was
part of the very first Beatport Re-Connect. Nakadia’s frequent online
performances resulted in a sharp rise of social media followers and made
industry professionals from across the globe aware of the unique artist she
really is. Beside Nakadia’s online rise during the crisis, she also finally found
the time to write down her unique story, which resulted in the release of her
autobiography “Positive Energy” in March of 2021. The book earned Nakadia
even more respect within the DJ community and beyond and has now even
caught the attention of Hollywood.

“ Mustache Bangkok Presents Nakadia ”
Nakadia on exclusivity for Bangkok at Mustache this Friday 17 June 2022 There is no better way to get into an amazing start at our new venue sukhumvit soi 23 than dancing… Read more
17 June 17 Jun from 8:00PM to 2:00AM